Just the other day, I left my studio to get the mail and make some lunch. I decided I could save a little time if I brought the mail and the lunch back to my studio so I could get right back to work. I heard some voices coming from my studio, so I stopped at the door to see if I could figure out what was going on. I could say I wasn’t eavesdropping, but that wouldn’t be true. I was.

What I saw was 3 little bears standing up in front of all the others who were in a small group. The main bear in the center front was being referred to as Lieutenant O’Brian. The bear on his left was being called Sergeant Baker. Lt. O’Brian was addressing the small group of teddies. 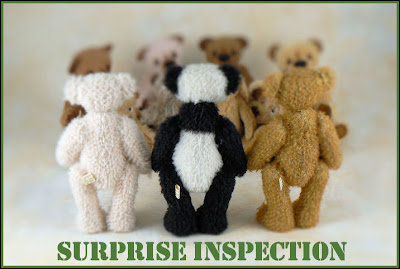 This is what I overheard:

Lt. O’Brian: I decided to check with you all since we’ll be hitting the road in a mere two weeks. Is anyone in need of anything?

A shy hand rises from a colorful furry individual.

That’s what happens when you get caught eavesdropping. Next time, you can be sure I’m going to eat before I come back to my studio.

Posted by ginger@bearbits at 12:36 AM