It’s been brewing for a while – this thought in my head. Then it sort of began to take shape and after trying to ignore it for a while, I relented. I gave it free reign and said, “Okay, you drive for a while. I’ll just see what kind of brilliant idea you produce. It percolated for a bit and then it became clear – I heard a definite “You’re going to need some chandelier parts for this”.
After much discussion, and without full approval from the saner parts of my brain, I admitted to my dear husband, “I think I’m going to need some chandelier parts.” And of course, after all this time together, much to his credit, he doesn’t flinch. “Sounds like a trip to the flea market,” he replies. No rolling of the eyeballs. No long extended sigh. Not even one question like “Now what are you up to?” Nope - just a “Let me get my keys.”

Now I don’t know about you, but in my experience, when I go in search of something specific and unusual, it often ends up being a wild goose chase. Yard sales, estate sales, flea markets are not the reliable kind of marketplace where you can just say to a vendor, “I’m looking for a doohickey about so big in purple.” And expect the vendor to reply, “Oh yes. Purple doohickeys – I just got a shipment of those in the other day. Aisle four under the sign that says “Doohickeys.” Yep- never happens.

Off we ventured to the flea market and I kept this mantra going in my head. “Don’t look at all the goodies here. You are on a mission. You are in search of chandelier parts.” I did dawdle a little and oohed and ahhed over many things. Though much of the stuff that looks nice is rarely bargain priced. It’s the boxes and bins that look like they ought to be out at the dump that hold the most promise for me in this case.

My husband and I go through the flea market in near proximity to each other, but at our own pace. He lingers over one thing or another and I over something else entirely. Kitchen glassware, used books, vintage paper, old photos are things that capture my attention. He finds the weird and unusual and a lot of times pretty cool looking stuff. I turned the corner ahead of him and passed by a couple of booths before spotting one that had ratty old boxes filled with rusty things. On closer inspection – light fixtures! Bingo! Who’d have ever thunk it? This is a rare occasion. And I didn’t have to settle for something that might do – I had choices. Almost too many.

Dear husband soon arrives and says “You found them,” as if it was just a matter of time – a when, not an if. “How much are they?” he asks me. “I don’t know,” I respond. “I like this one,” I said pulling out a rusty, dusty and dirty object that probably held pride of place in a room a long time ago. He lifts it up and scans the area locking eyes with the vendor. “How much?” he asks. “Three dollars,” comes the answer. “And this one, my husband continues with yet another piece of lighting junk treasure. “Five dollars,” comes the response.

Now I’m torn. It’s exactly what I had in mind and yet should I really have to pay for this thing that surely anyone else would have pitched long ago? On the other hand I’m thinking, ‘Only five dollars - this whole thing for only five dollars!” See what I mean by torn? Part of me says I shouldn’t have to pay anything and the other part says what a bargain. Then I begin to think I hardly ever get this lucky. And so we end up buying the thing. I can just imagine the people we pass thinking we must have lost our minds. It’s funny though that this isn’t a problem for me. Mine was gone a long, long time ago. 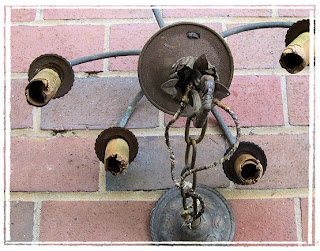 It ended up being kind of like a stray dog that wanders up to your porch.  Very sweet looking but you can't let it into your house.  Who knows what mess it will leave behind? 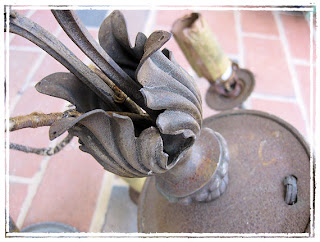 Even in the rusty state it was in, you could tell that once upon a time it had a lot of style. 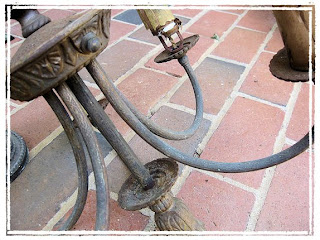 You can't see it very well in this photo, but these arms have an intricate pattern pressed into them. 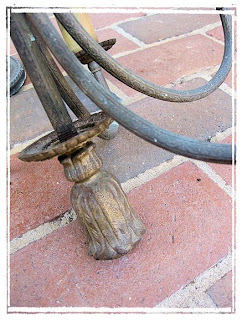 Now the jury is still out on whether my idea will be a good one or just another distraction from the things I should be working on. We’ll see. It depends on how courageous I am when it’s finished as to whether I’ll ever return to this space with photos. Yep, totally lost my mind . . .
Posted by ginger@bearbits at 10:06 PM

Email ThisBlogThis!Share to TwitterShare to FacebookShare to Pinterest
Labels: work in progress