Several days ago I discovered quite by accident that my husband has a twitter account. He’s not an avid poster, but he does follow a few friends and tweets the occasional comment. For some reason, this took me quite by surprise. After all this time, there’s hardly anything we don’t know about each other. There are so very few secrets – that I know of. I even find it difficult to obtain a birthday gift or Christmas gift for him without some inkling of it getting back to him. Not only was it amusing that he had this account but that he had had it, albeit inactive, for several months. The opportunity to razz him about his secret identity was much too rich to let pass by. Now and then his cell phone goes off and before this I could most likely guess that it was either our son or our daughter with some interesting tidbit of information for us.

Then last night, we (me, him and our daughter) were having dinner at a nearby deli and his phone buzzed. Immediately, I’m thinking to myself, “I wonder what our son has to share.” I knew it wouldn’t be our daughter, because even though stranger things have happened in her texting, I didn’t think she would sit right in front of us and send us a message. I asked, “What’s our son up to?” and he replied that it wasn’t him. It was an update from one of his twitter pals. Then my daughter says with much shock and surprise, “YOU have a twitter account?! How am I ever going to keep up? Blogs, twitters, facebook!” Then I told her, “Your dad has a secret identity!” Now the two of us can torment him together. Thankfully, he’s quite used to it after all this time.

But, he’s not the only one living a double life. I, too, have a secret identity. No, it’s not twitter; at least, not yet. I learned a short time ago that after being in business these twenty-five years that some of things that I took for granted at my bank have now changed and I needed to catch up. No longer could I coast along, putting in deposits, credit card charges, and so forth unless I was operating under an ‘assumed name’. The guy at the bank and I laughed about it – especially after all this time. My task, “should I choose to accept it”, was to go forth and acquire an assumed name. Through legal governmental channels and paperwork, which was actually quite painless (another surprise), I am now operating under an assumed name. Please don’t tell anyone. 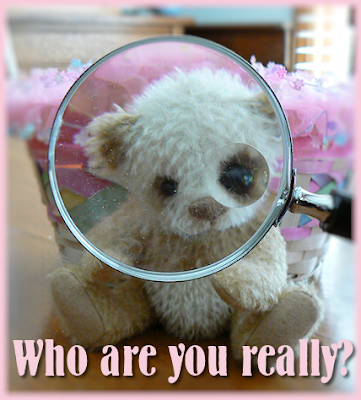 Posted by ginger@bearbits at 5:16 PM