I had been in this business for just a few short years when I came to realize that in addition to the new people I was meeting at shows, I was also seeing some collectors quite frequently. I became friends with quite a few of them. When the Christmas season rolled around, I decided I wanted to send them a card. It seemed like a fun thing to do, but I wanted to make one using a photo of some of the bears I had made. I don’t remember how many I sent that year but it wasn’t a lot. Then a year or two must have passed before I decided I really needed to send out cards again. It was my way of acknowledging how much I appreciated their support and friendship.

I received such a positive response that it became a tradition of sorts. Some years I have had the whole family pitching in to help me get them mailed. Other years, I have done most of it myself, though without my husband’s computer help, it would have taken me ages and ages – all those addresses, you know. Nowadays, it’s much better for my sanity if I start thinking cards early. (I said ‘better’ not a cure. If only . . .)

In a way, the cards are snapshots of progress and trends in my work over time, each with a Christmas theme. Sometimes the inside and the outside went together, but most of the time, the photo of the bears was just that, a photo and the inside text was something altogether different. I won’t post all of the Christmas card photos. I mean it would be like looking at pictures of my vacation. I have already done that you say? Oh. Well, still, I won’t post all of them, just a few of my favorites between now and December 25th. 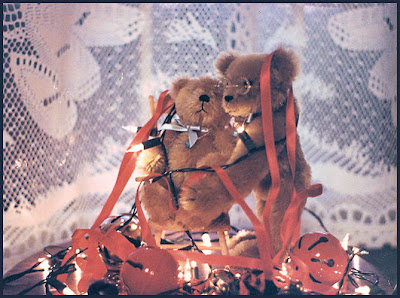 Here's the photo on the very first Christmas card I sent out.

My work has changed just a bit since then.

Posted by ginger@bearbits at 12:42 AM