The recipient of this surprise is a huge Harry Potter fan – like many of us – except I do believe she’s has me beat. I had to decide how to approach the idea and my goal was to stay away from trying to create a Harry Potter bear or anything that would imitate those icons of the books and movies.

Finally it came to me that this piece should reflect a similar enthusiasm for the stories, the characters and the magic of it all. The little bear that would reside in the box should be a fan as well – a big fan – the kind whose mother is very understanding when he wants to hang out under the stairs and read his books by candlelight.

On the left side of the box, I decided to create some mini-posters for this little HP fan but have them in frames similar to the framed paintings and wall notices in the movies. 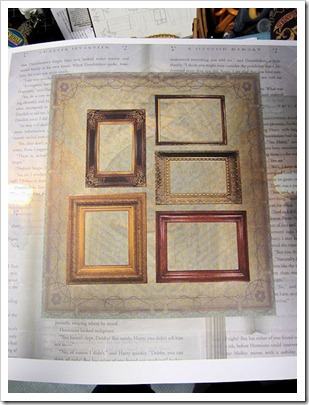 This was fun to do but there’s always a bit of nerve-wracking going on when you really, really don’t want to mess anything up. This photo was taken just after the clear acrylic sealant had been applied. That is why they are milky looking. 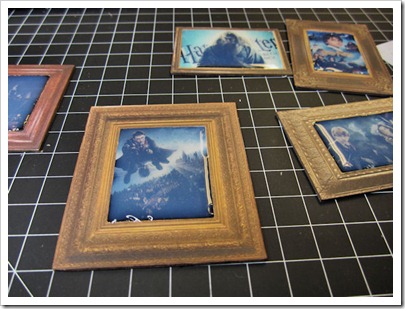 While the posters were setting up, I moved to create some potion bottles – doesn’t every wizard need a few potions up his sleeve – or on the shelf – just in case? 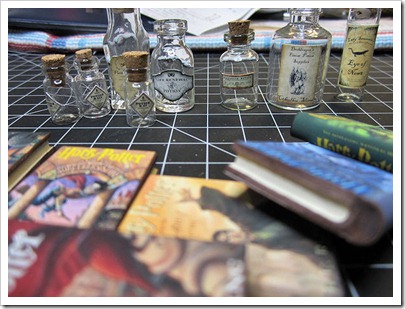 Of course this little fellow has every Harry Potter book in the series. He’s read them all at least twice, maybe three times. He’s working on memorizing the spells . . . 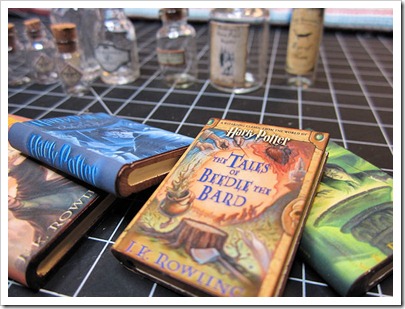 and the potion recipes. 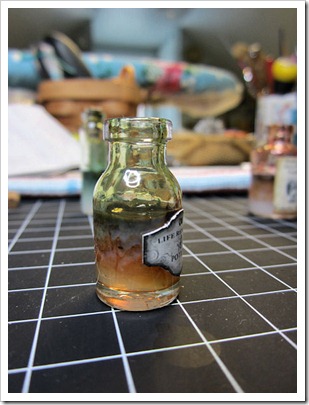 Here is the left side of the completed box. See the wooden wand there on the side? My husband whittled it as well as all the others contained within. 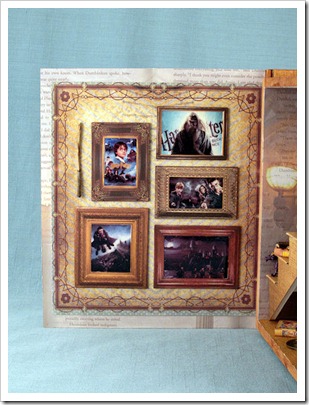 This is the right side of the completed box. This bear has created his own ‘cupboard under the stairs’ and was lucky enough to find a framed print of the Tri-Wizard Cup. He was so excited when it arrived in the post! 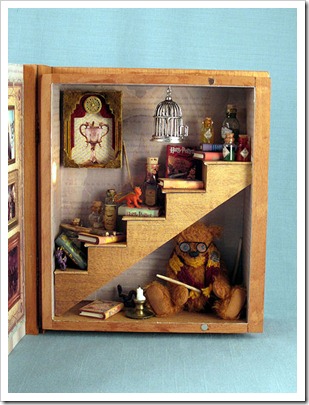 Meet the resident of this box – Muggleton. I wish I had thought up that name but it was chosen and bestowed on him by his new owner. It suits him perfectly. In an effort to pay tribute to the hero of the books, this bear wears a Gryffindor scarf (knitted by my daughter) and those round black glasses (custom made by me – my optometrist did not have anything in his size!). He never goes anywhere without his wand. 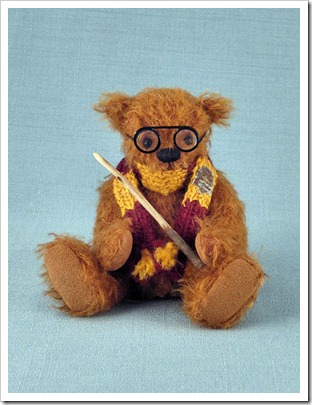 So here it is at last – the entire piece I called “Essentials of Magic – First Year”. Happy Birthday to one special friend! 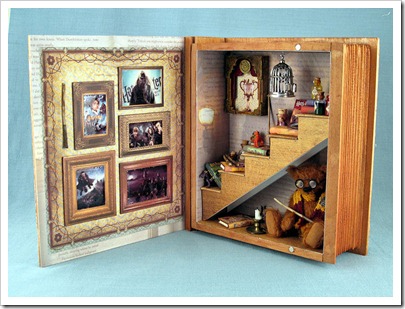 Posted by ginger@bearbits at 11:38 PM