Now that’s really a scary thought! Being in either place could keep you awake nights. But I’m used to it and right now it’s a rather exciting place to be – full of possibilities. I was reading something yesterday, which happened to be my son’s birthday (Happy Birthday, dear!). It said “our natural inclination is . . . to always try to forecast what will happen next – that we look upon uncertainty as a bad thing.” He goes onto to say that “not knowing what tomorrow will bring . . . is generally expressed with a sigh of sadness, but it should be an expression of breathless expectation.” With this in mind, I decided to embrace the adventure of an unknown future with this sort of breathless expectation. Wish me luck!

Speaking of the future, I announced the date of my Spring Internet show on Monday. Those who had signed up to be notified received an email with a few short details with more to come in the next few weeks. Since 2001, I have held two Internet shows each year, with a few exceptions – like weddings and such. It’s been a blast every single time. I’ve made some terrific friends through these shows and I look forward to offering my newest and best creations at these events. If you would like to join my list, it’s really easy. Just click here, fill out the form (first and last name please – I have lots and lots of duplicate first names) and then submit.

Back to my desk: I’ve just received some supplies (yea!) which have allowed me to complete 4 bears that were on hold. These little guys are patiently waiting for some buddies to join them. No telling what trouble they’ll get into when that happens. Right now, I can keep my eye on them while I work so being a nanny and a bear artist at the same time isn’t too difficult. The good problem I’m having is what to work on next now that these are finished – so many ideas. It’s like standing on a really high diving board above a pool of possibilities and I’m talking myself into pinching my nose shut and just jumping in –

About expectations: I came across this Mary Engelbreit illustration that is just so hilarious I had to share. The first thing that popped in to my mind for a subtitle was ‘Possibilities’! Scared and excited at the same time! Check out the mouse beside her on the floor. 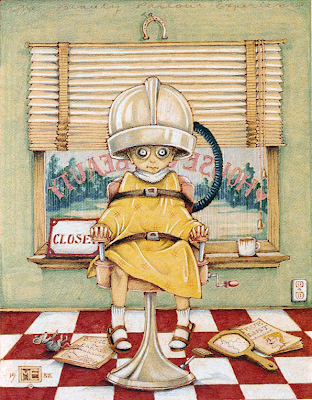 Posted by ginger@bearbits at 12:01 PM