Every weekend there is a flea market here – for now. I say that because when the State Fair arrives the Flea Market shuts downs temporarily. And it’s almost time for the State Fair so we’ve only one more flea market weekend before they close the doors so to speak. I do miss it when it’s gone especially when we can occasionally luck into an unusual treasure like this. 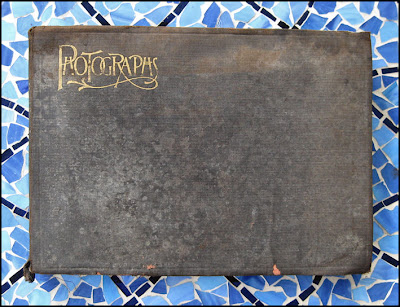 The gentleman selling this photo album had gotten it from an estate sale earlier. He had loads of interesting stuff and I wondered what he had found that he wasn’t selling. It must have been a great one.

I was turning this album page by page after we had purchased it and found all kinds of extraordinary photos from the 1900’s. Children, women fashionably dressed, a costume party, a day at the beach – it was fascinating.

I wondered if I might be lucky enough to find a photo of a teddy bear among its pages. Do you agree that is young woman is holding a teddy bear? 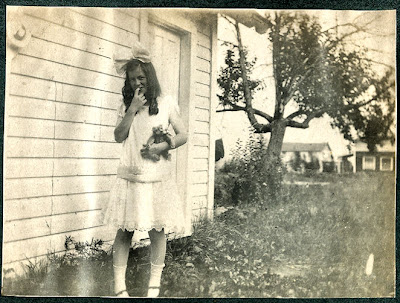 Here she is again with a couple of other people. I am wondering if they were putting on a play. Look at the woman with the lasso and the woman in the Oriental kimono-style dress. 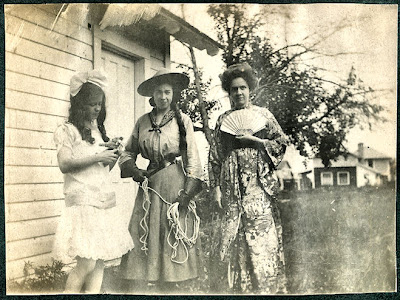 I also thought you might enjoy this one of a baby and her baby doll. Do you think these folks were wealthy? 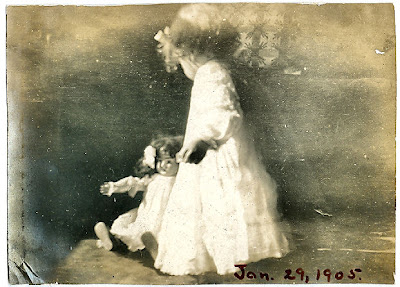 Or this portrait of these women dressed for some special occasion. I do wonder what they were thinking and where they were going. Some of these photos were taken in New York from what I can gather. 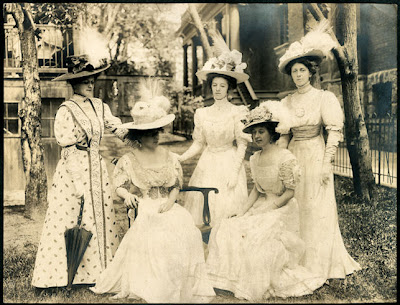 I especially like this one that shows a group of women going swimming. 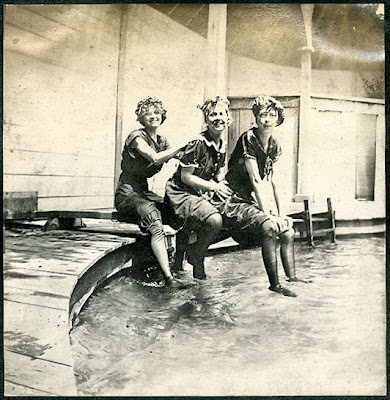 I think what intrigues me about these photos is that they show life as it was. Most of the time when I see old photos at the flea market, they are portraits taken in a studio. And while they are somewhat interesting, they seldom tell you much about the life the person lived. In this album, the photos show a house being built, vacations, interiors of a home and a shop, the occasional car, and family pets.

Now this is when my special superpower would be very exciting. Miss that post?  You can check it out here.
Posted by ginger@bearbits at 10:55 AM

Email ThisBlogThis!Share to TwitterShare to FacebookShare to Pinterest
Labels: discovery